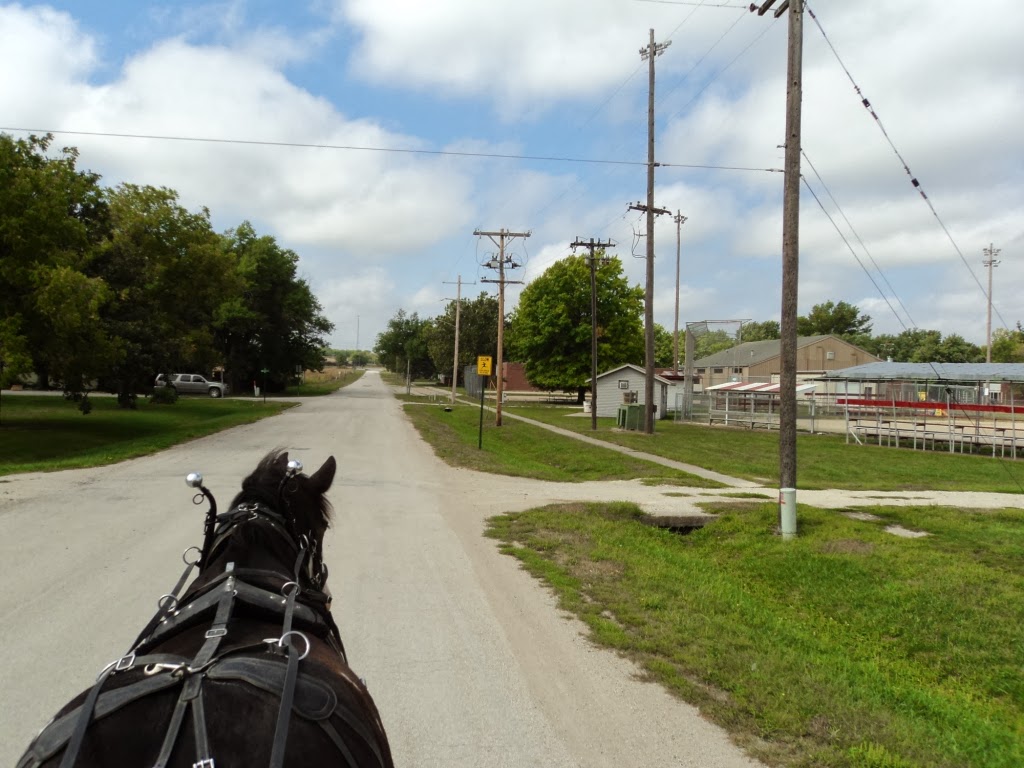 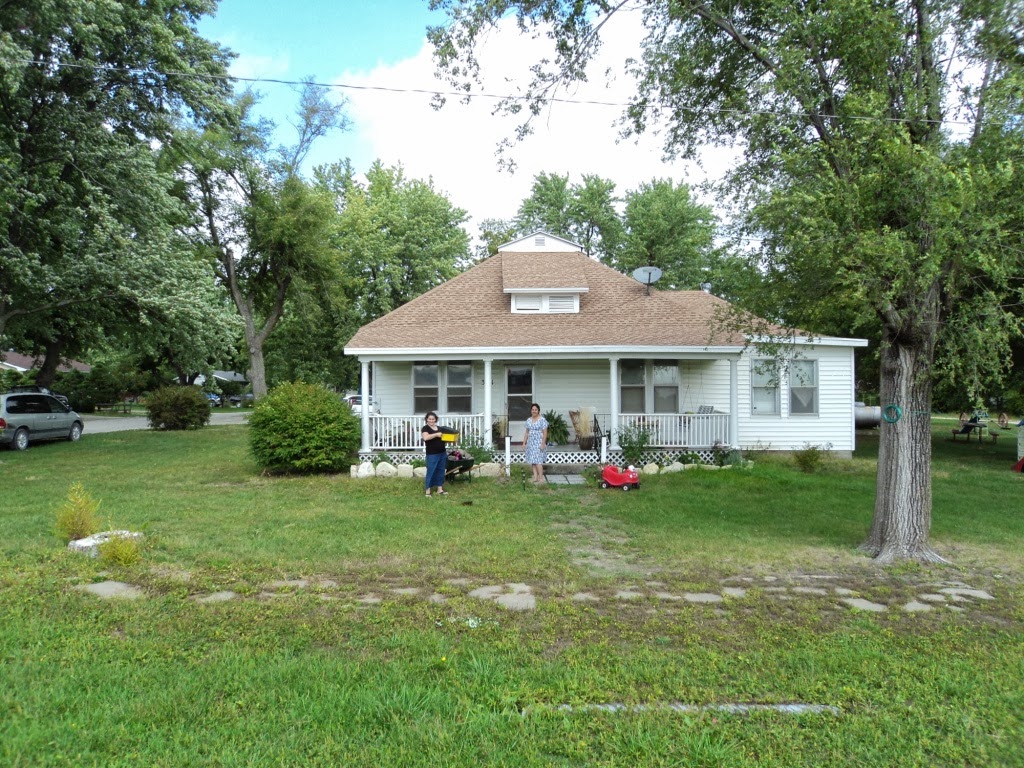 From our camp at Bill’s place, we traveled 5 miles to Emmett, KS (a town so small, if you blink you’ll miss it). It was a mild and hazy fall day, and so intense was the glare of the sun; those without sunglasses squinted near to the point of closing their eyes. Ladies smiled and waved as I slowly rolled along (above right), I happily shouted what I was about, then stopped and asked if I could take their picture.

Carol and her daughter Stella on Main Street in Emmett. As I understand it, the State closed the school in Emmett and sent Stella to a consolidated school. Stella issued a written protest with the State, which was carried by a local newspaper. Stella’s protest centered on the closing of the school and God being kept out of the larger school. Stella is now being home schooled by her mother Carol. On hearing this, I said, “Way to go Carol and Stella!” 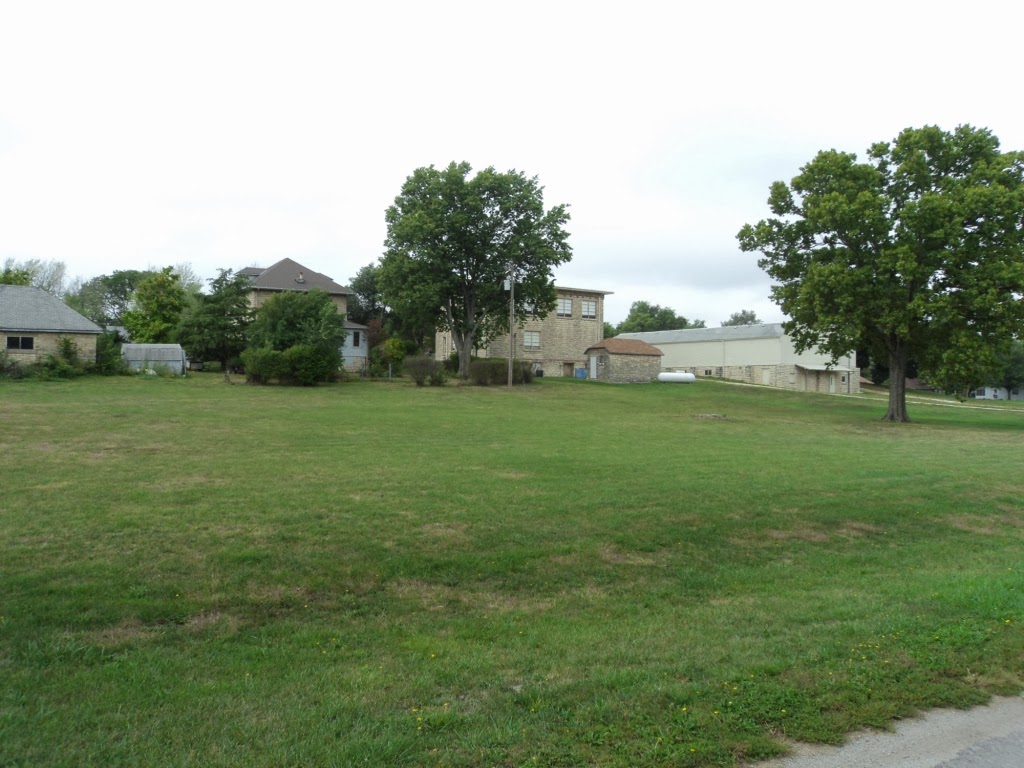 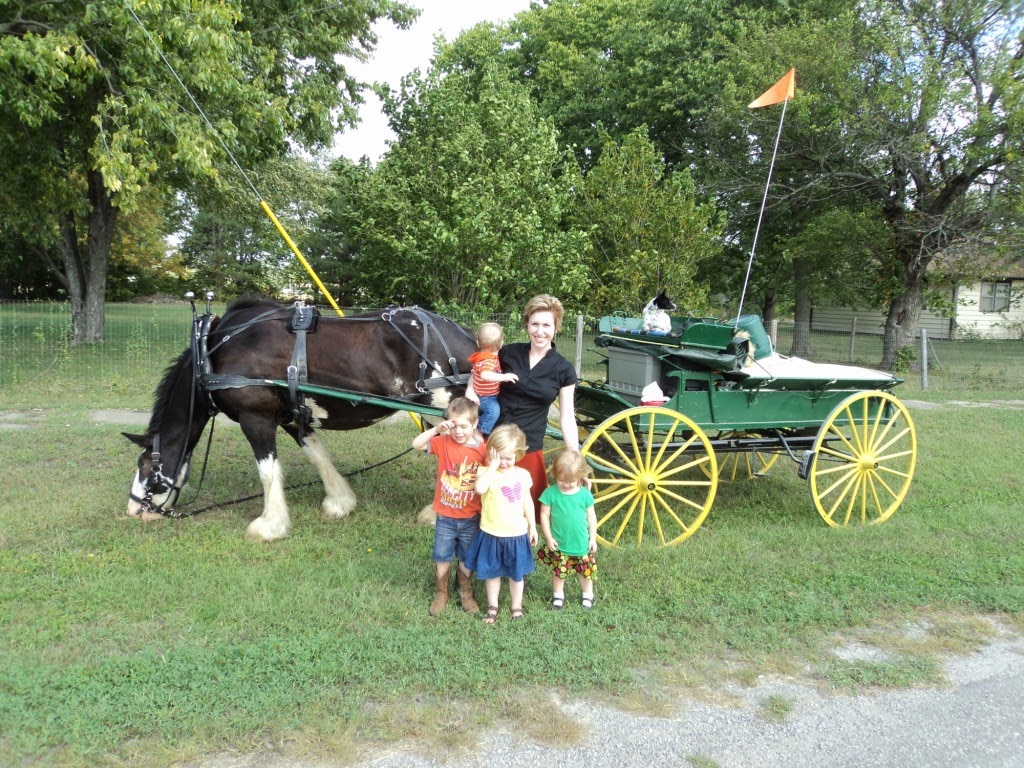 Yep, those are all her kids plus one in the “oven,” and Emily’s proud of it! The sun was behind me and the kids, who had already suffered many photos, were good sports. Emily (same as Carol and Stella), won’t be sending her children to public school but will give them a Christian education. In small town America, Jesus is King. Let’s stand together and keep it that way! 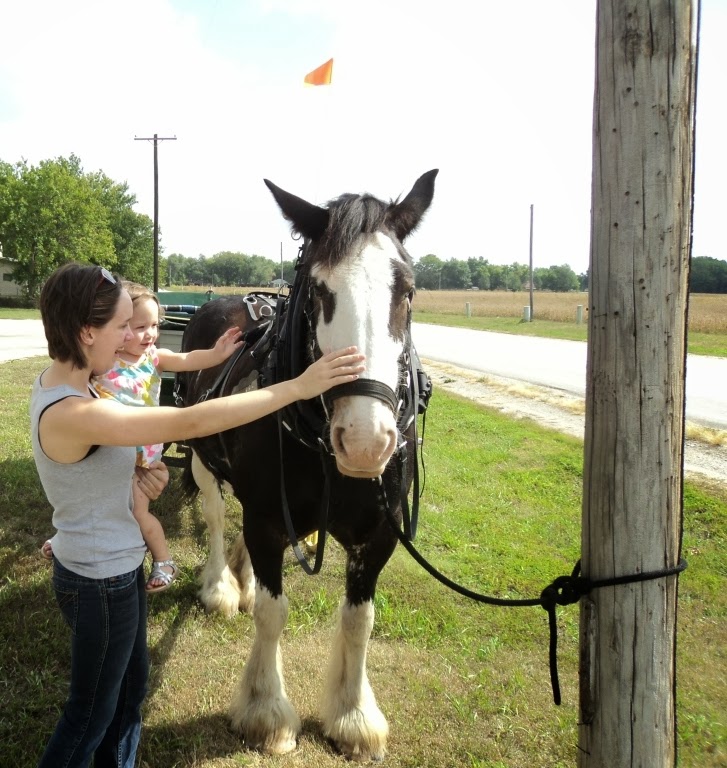 Jordon held her daughter Haydn while joyfully petting Reba. And like before, no one knew I was coming but our cultural bond (our gift) was an instant connection. 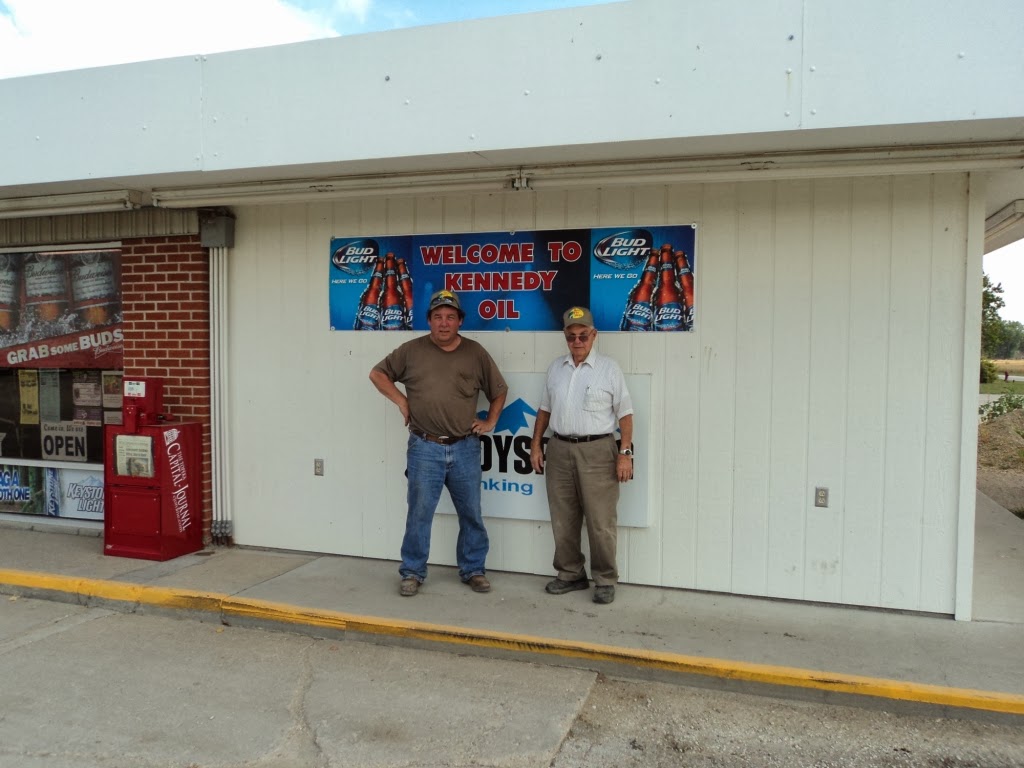 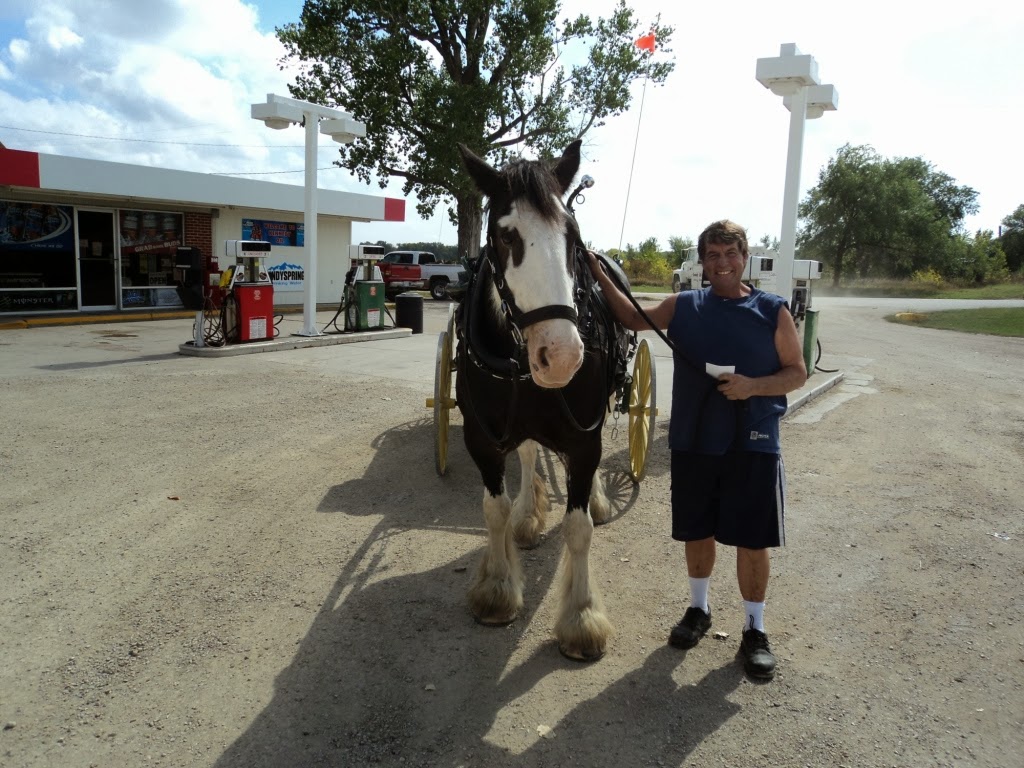 Frank and sons Bill and Joe at their service station (Kennedy Oil) in Emmett, KS. Joe is pictured on right and is holding one of my cards. He was out in the company oil truck when I took the photo of Frank and Bill (on left). Joe came to switch places with Frank and Bill who were just leaving in company truck (visible behind Joe in photo on right). 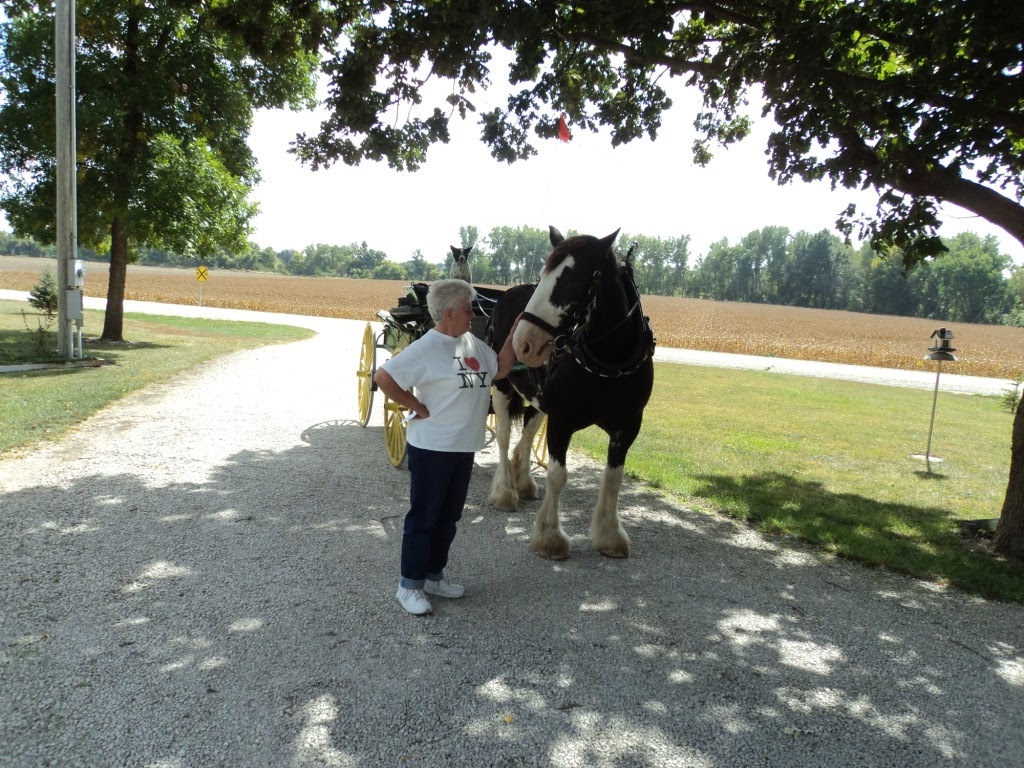 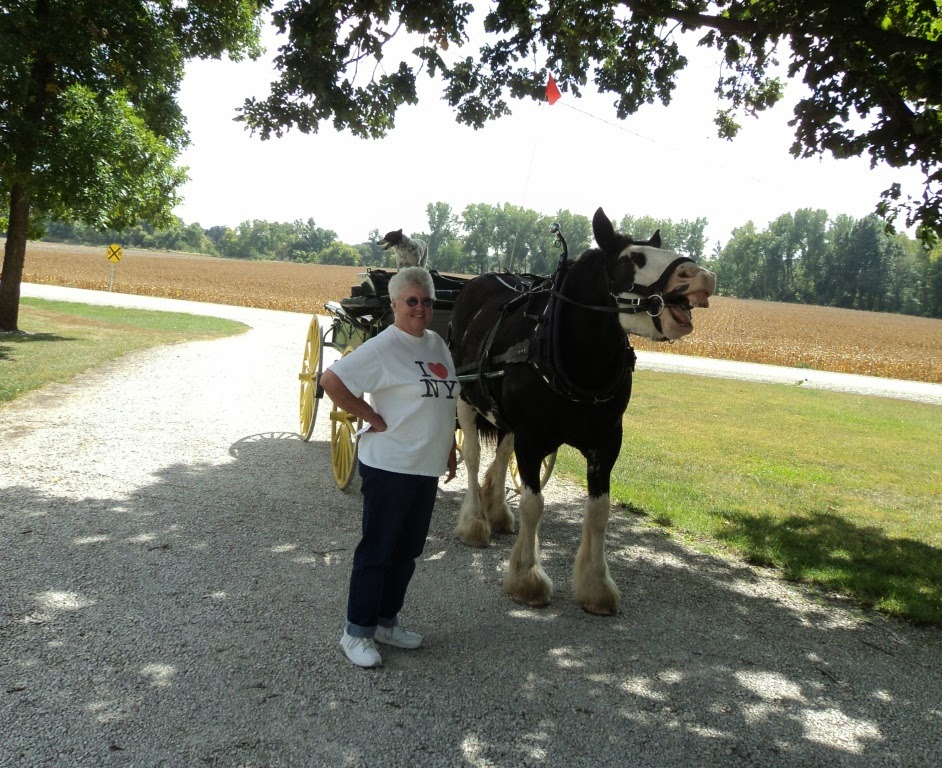 It looks like Dorothy and Reba are telling jokes. Dorothy gave us a place to have lunch just outside Emmett with shade and lush grass for Reba. While we were eating, Dorothy came with cucumbers, tomatoes, and dog food and treats for Jill. Then we were on our way, traveling the gravel roads. 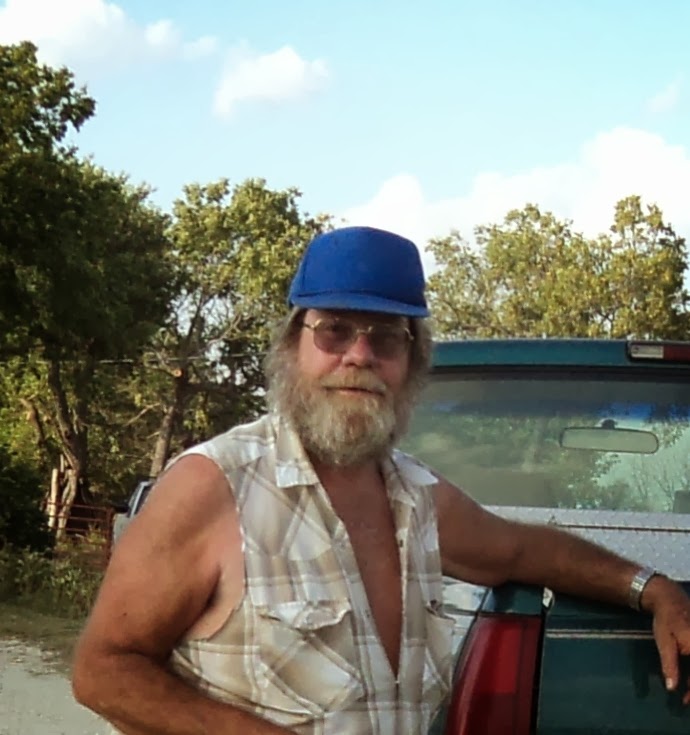 Tom lives a few miles from Emmett on the farm that his great grand-father started in the 1860s! Tom gave me a great place to camp with good grass, alfalfa, and spring water for Reba. Tom showed me the campsite in his truck and then brought me back to the farm house, whereupon I drove my wagon to an excellent camp by the spring.

Posted by James Sheldon at 3:27 PM