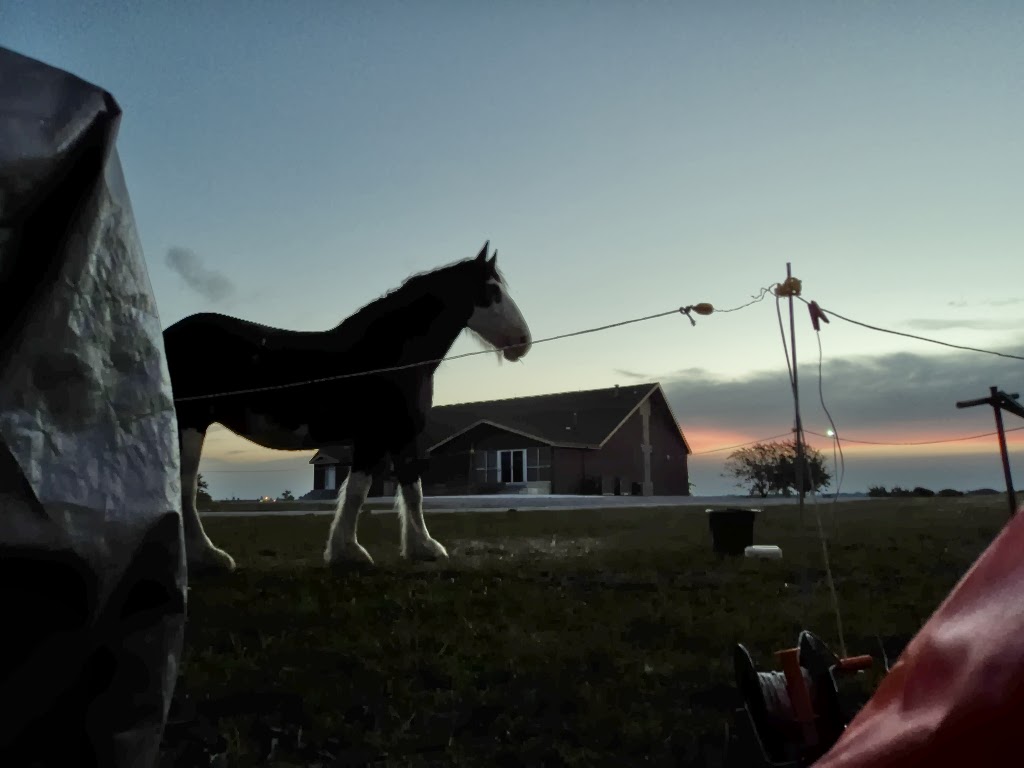 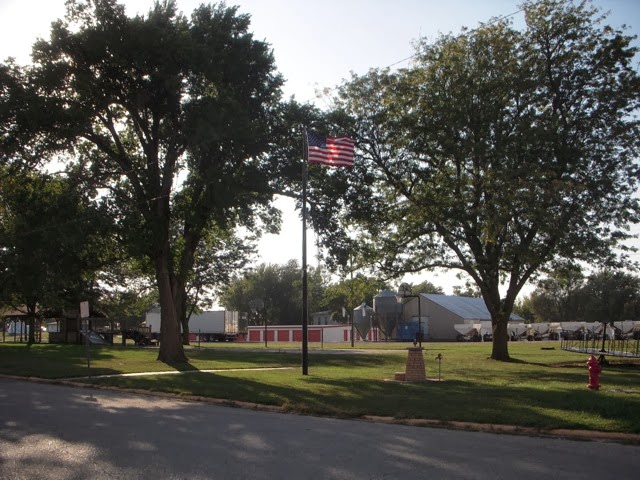 
I changed my plans after praying and ate breakfast in camp instead of town. I then spoke with pastor Bob and his wife and in the course of our conversation; I got an idea (which I would use later while introducing myself in town). I was relieved to see Reba sleep all morning while I did chores because she’d had a restless night and this should have been a rest day for her. I hoped she would get more sleep while I did business in town. We rolled into Nortonville at approx. 11:15. The residential area was dead quiet, the sky was overcast like it would rain, and I wondered if I’d done the right thing by waiting. The town looked very nice with well kept homes like people cared. I passed a daycare and the children waved from the front porch. Arriving downtown about 11:30, I tied-off on the main drag and, because it was the lunch hour, everywhere I turned there was someone to meet and speak with. I went all around the downtown, too many names to remember, good folks, truly, not a sour face in the group. I wasn’t yet thinking about it or I would have gotten pictures of folks (the photo of park above is from pastor Bob). As I went around, I introduced myself by telling how my great grandfather, grandfather, and father all sold farm equipment and did a little farming on the side. I then told my message which is this: Our little towns and farms will continue to dwindle and disappear as long as we follow a godless world that always wants more, more, more. The good news is, we can save what we love. We need only follow the example of our forefathers and mothers who put themselves in God’s hands and, by doing so, built something greater than their ability to imagine. Looking back, it was a little whirlwind of a start in the best sense. I was preaching to the choir but God knew what I needed, and I left town so inspired; I couldn’t help believing that we really can save our little towns and farms. We can survive and, in fact, we can do better than survive; in God’s hands, we can thrive! 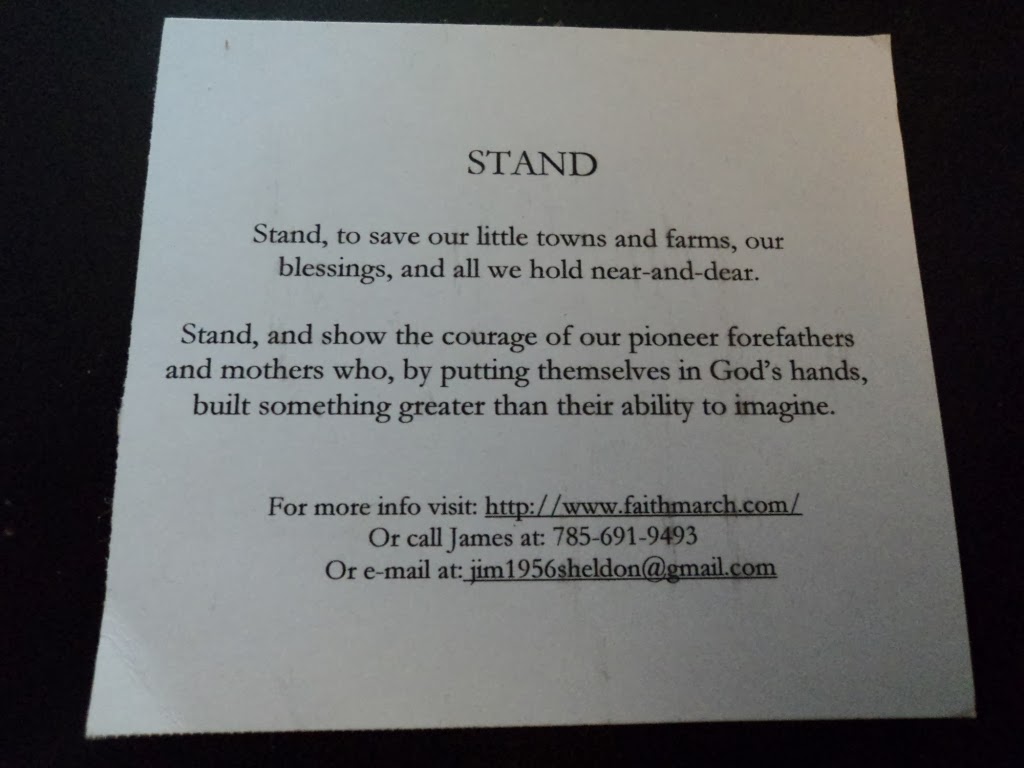 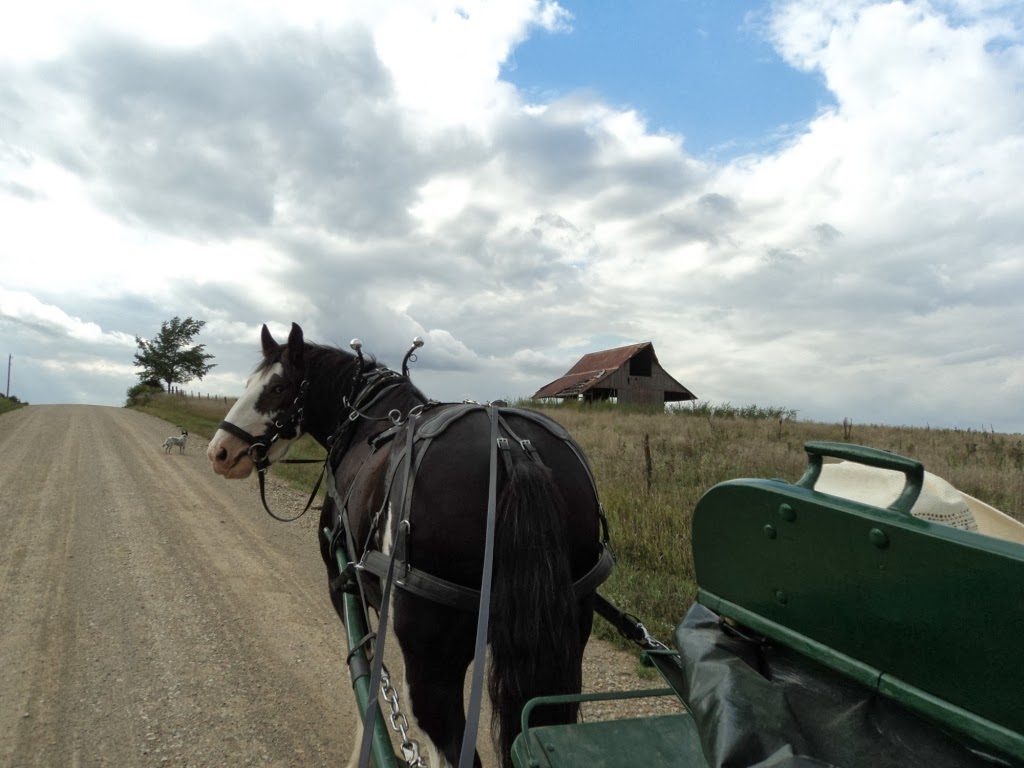 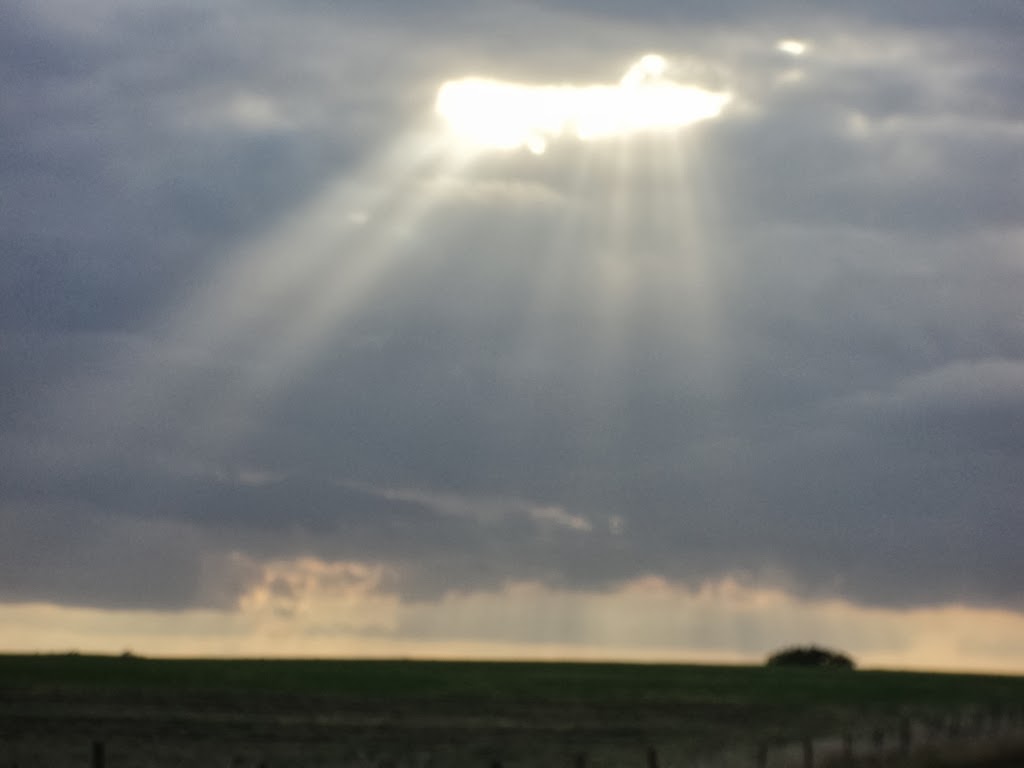 Departing Nortonville (approx. 2:30pm), Reba chomped-at-the-bit to pull the wagon. She’d slept that morning at church, and again while tied to a pole downtown. Now she pulled with purpose on the road to Holton. I helped by getting off the wagon and walking up each hill so she wouldn't have to pull my weight. Still, we were not in shape and we wore ourselves out after going up and down hills for three hours. We kept stopping at farms in hope of a place to camp, but no one was home. I rarely pray for such things but I was so out of shape and tired; I prayed for a place to camp with water over the next hill. Then cresting the hill, I saw nothing. But just then, a truck appeared from the opposite direction. It stopped beside me, whereupon a young man looked out and said, “I hear you might need some water?” His name was Aaron, and he had a tub of water for Reba in the back of his truck (he figured we needed it because he’d heard a man was traveling by horse and wagon on the road to Holton). I was amazed, and I made camp right there on a patch of lush brome grass standing on an elevated flat between road and fence. And I took the photo (above right) there and then, from my campsite. It happened just like that. But I wouldn’t call it a miracle. It was how things can work even with a heart like mine, worrying, which is a sign of little faith. God can do a lot with a little.
Posted by James Sheldon at 2:59 PM